Useful links with The Dickens Fellowship

Once the home of Miss Mary Pearson Strong, on whom much of the character of Miss Betsey Trotwood in David Copperfield was based.

The British Library’s Charles Dickens profile page includes a biography as well as exclusive essays and articles written by prominent academics on his literature. Also included are scans of original copies of his work including ‘London Recreations’, a short story published in the Evening Chronicle newspaper when Dickens was just 23 years old.

A charity dedicated to fighting to protect our Victorian and Edwardian heritage.

The English Association
over 100 years at the forefront of English 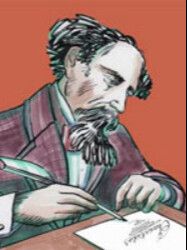 DJO successfully created, by the time of the Charles Dickens bicentenary in February 2012, a complete online edition of Dickens’s weekly magazines, Household Words and All the Year Round.

An informative and friendly site on a variety of topics related to Dickens.

To avoid the Victorian era’s biases against women writers, Mary Ann Evans (November 22, 1819–December 22, 1880) began writing under the male pseudonym George Eliot. After reading Scenes of Clerical Life, Dickens wrote "If they originated with no woman, I believe that no man ever before had the art of making himself, mentally, so like a woman, since the world began."

Elizabeth Gaskell was a novelist and short story writer, who lived in Manchester in the mid-19th century. She regularly contributed to Charles Dickens’s weekly magazine, Household Words, where her novel North and South was first published in serial form.

The Alliance of Literary Societies is the umbrella organisation for literary societies and groups in the UK.